Typography: Letters in the Natural World 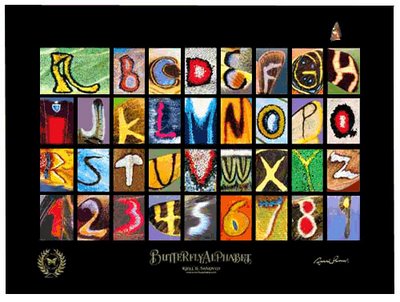 In the spring of 1960, Kjell Sandved arrived at the Smithsonian to conduct research. There, he met Barbara Bedette, the woman who was to become his collaborator, friend, and love of his life. And there, also, he discovered an old cigar box full of butterflies and moths. Among the specimens in the box was one with the letter “F” woven in a tapestry of color on it’s wing, reminding Kjell and Barbara of the embellished letters in old bibles and illuminated manuscripts. The discovery was to change their lives. They decided to travel the world and find all the letters of the alphabet from the wings of butterflies and moths. If there was one letter, there must be others. 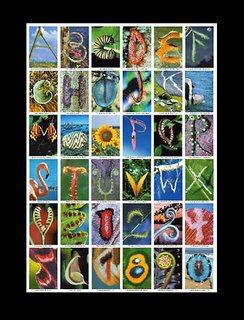 The challenges were many, not least, Kjell knew nothing about photography and Barbara, nothing about butterflies or where the greatest diversity of design could be found. But, they persevered and in 1975, after years of traveling to botanical gardens, nature reserves and rainforests from the Amazon to New Guinea, and surviving malaria-infested jungles, leeches and ants while photographing letters and numbers on the wings of butterflies and moths (without killing any), their discovery was revealed in the first issue of the new Smithsonian magazine.

Visit the site and discover another nature alphabet and play around with both of them, even send an e-mail.
Posted by DianneOhio at 5:00 PM