Hornbooks and battledores were two early literacy teaching aids. A hornbook was a primer for children, use from the 15th to the 18th century, consisting of a sheet of paper (or parchment) mounted on a thin wooden paddle, usually with a handle that was perforated so that the hornbook could be hung at the child’s girdle, or belt. The sheet usually had the alphabet, some pairs of letters, and a religious verse, often the Lord's Prayer. Because paper was so expensive, parents and teachers wanted to protect it. So they covered the paper with a very thin piece of cow's horn which was so thin, you could see right through it. Thus, the name, hornbook came to be used to describe this type of “book.”
Not all hornbooks were the same. Many were made out of metal, sometimes even silver. Others had the alphabet carved into paddles made of ivory (photo above). One special kind of hornbook was made out of gingerbread. As children learned each letter of the alphabet, they were rewarded with letters to eat.

Once the price of paper became cheap, companies started to make battledores. Battledores was an early form of badminton played with a flat wooden paddle and a shuttlecock. The paddle was probably similar in shape/size to hornbooks, thus, the word probably seemed appropriate as the name for the new book form which derived from them. Popular in the 1800's, battledores were made of thin cardboard. Although some battledores were made in the shape of a hornbook, the card was usually cut into the shape of a rectangle and then folded in
thirds.

The content of a battledore was similar to that of a hornbook, including the alphabet in both capital and small letters and pairs of letters as a phonics lesson. But, unlike the hornbook, battledores frequently had a mixed-up alphabet with the letters out of order as a way to help children distinguish individual letters. They also had lists of short words and sometimes included a prayer, but normally they had a short story or fable instead. With a greater surface area, battledores could contain illustrations. These were generally pictures of everyday life that would have been familiar to children of the time. 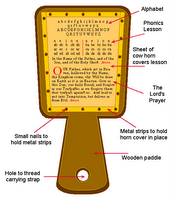 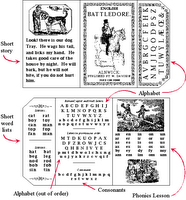 Posted by DianneOhio at 1:42 PM

I love reading your blog. I like books in all forms, and you put so much effort into collecting all this information.

I am glad we didn't have gingerbread letters when we were young. At least I was a skinny kid then. :)

Can you give a reference as to where you got your information? I am writing a paper on the history of reading eduation and you gave such great info, but I need to know where it came from. thanks.

thank you for the information. It really helps me a lot.


Teach Your Child to Read Today!

Reading is one of the most important skills one must master to succeed in life. It helps your child succeed in school, helps them build self-confidence, and helps to motivate your child. Being able to read will help your child learn more about the world, understand directions on signs and warnings on labels, allow them to discover reading as an entertainment, and help them gather information.

Learning to read is very different from learning to speak, and it does not happen all at once. There is a steady progression in the development of reading ability over time. The best time for children to start learning to read is at a young age - even before they enter pre-school. Once a child is able to speak, they can begin developing basic reading skills. Very young children have a natural curiosity to learn about everything. They are naturally intrigued by the printed texts they see, and are eager to learn about the sounds made by those letters. You will likely notice that your young child likes to look at books and thoroughly enjoys being read to. They will even pretend to behave like a reader by holding books and pretend to read them.

At what age can you start teaching a child to read? When they're babies? At 2 years old, 3, 4, or 5 years old, or wait until they're in school?

If you delay your child's reading skill development until he or she enters school, you are putting your child at risk...

Did you know that 67% of all Grade 4 students cannot read at a proficient level! According to the National Assessment of Educational Progress, of those 67%, 33% read at just the BASIC level, and 34% CANNOT even achieve reading abilities of the lowest basic level!

There is a super simple and extremely effective system that will even teach 2 and 3 year old children to read.

This is a unique reading program developed by two amazing parents and reading teachers, Jim and Elena, who successfully taught their four children to read before turning 3 years old. The reading system they developed is so effective that by the time their daughter was just 4 years 2 months old, she was already reading at a grade 3 level. They have videos to prove it.

>> Click here to watch the videos and learn more.

Their reading system is called Children Learning Reading, and it is nothing like the infomercials you see on TV, showing babies appearing to read, but who have only learned to memorize a few word shapes. This is a program that will teach your child to effectively decode and read phonetically. It will give your child a big head start, and allow you to teach your child to read and help your child develop reading skills years ahead of similar aged children.

This is not a quick fix solution where you put your child in front of the TV or computer for hours and hope that your child learns to "read"... somehow...

This is a reading program that requires you, the parent, to be involved. But the results are absolutely amazing. Thousands of parents have used the Children Learning Reading program to successfully teach their children to read.